Well. Today I spend about 6 hours editing one of the environmental Torahs for the Canfei Nesharim Website. Feels good to actually DO something, ya know?
It's four hours before New Year's, and I am planning on brushing teeth, watching a movie and maybe reading some more of Harry Potter & the Half Blood Prince. I was thinking about finding somewhere to go at 6am to watch Chris Rock live from New York, but I reckon that won't happen..
According to the site simpletoremember.com, it was Julius Caesar who put the New Year's celebration on January 1. And not only that:
Caesar celebrated the first January 1 New Year by ordering the violent routing of revolutionary Jewish forces in the Galilee. Eyewitnesses say blood flowed in the streets.
You know, in Israel, they call the secular New Year "Sylvester." Turns out it's in honor of St. Sylvester, a 4th Century pope who had some involvment in the conversion of Constantine. For some reason, December 31 is St. Sylvester Day. Some more fun facts about Sylvester-
The year before the Council of Nicaea convened, Sylvester convinced Constantine to prohibit Jews from living in Jerusalem. At the Council of Nicaea, Sylvester arranged for the passage of a host of viciously anti-Semitic legislation.
Oh, the Israelis. Supposedly there was a push to call New Year's "Adolph," but there were protests that Hitler wasn't Christian enough...
By the way, I haven't checked my sources on that simpletoremember site. Possible Jewish Conspiracy warning.
Posted by Shimshon Stu Siegel (shimstu) at 8:06 PM 1 comment:

I woke up Christmas morning, and had a strong memory of wintery holiday mornings at the Meade house in Pottstown, PA. Realizing the time difference, I figured that Tommy and Chris and the family were having some whiskey nightcaps in the warm kitchen, maybe after a nice hearty dinner.

I yearned for some family Christmas cheer with my old friends. At the least, I reasoned, I should get some eggnog. But where? Then I thought of the small selection of markets in town that cater to American immigrants- places where you can find a Dr. Pepper or an A & W, some Snyder's Honey Mustard Pretzels, a pint of Ben & Jerry's. Alas, I realized, these are American Jewish immigrants, and so the demand for nog is most likely limited-- these Israeli-American Jews take their Jewiness so seriously...

Oh well, I sighed (an internal sigh), at least I can blog my desire for eggnog.

I left the house for an appointment, figuring I would have my nog need online before America awoke into Christmas. As I was walking through the neighborhood, I got a text message from Ariel Elisha:

Intoxicated with glorious synchronicity, I called Elisha posthaste, and the plan was afoot.

Several hours later, we sat in my room, sipping our homemade concoction, listening to Frank and Bing sing all those Jew-authored Yuletide classics and feeling, at least for that moment, that the two halves of our lives were not so far from each other.

And that's the short of it.

A dream of Cannes, sung to a Chord of Blood 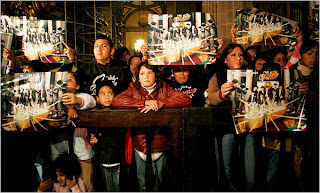 If I was living in America right now, I would drop everything and dedicate the next 2 years of my life to making a film based on this story (<-- click there, for the uninitiated). Over the past year and a half, 13 Mexican country musicians have been murdered. Assassinated, I'd say. Some of them in some nasty gangland execution style.Three of them in the past 2 1/2 weeks. And no one is quite sure exactly what's going on.
This has got to be one of the most gripping thriller scenarios I've ever heard. And imagine the music that would go with this flick..
In fact, if someone's willing to put out the first, let's say, $9,000, and help out with the project down the line, I'll start research tomorrow, and come back to the States in February, after my musical sizzles the Israeli stage. I have the dual part of the Governor/Inkeeper, and a solo song to boot.
I figure that The Man of LaMancha is a good prep to a project like this, anyway.

Welcome to the New Wanderingstu. More to come on that.
Posted by Shimshon Stu Siegel (shimstu) at 11:41 PM 4 comments: